Sarah Ryan, professor of industrial and manufacturing systems engineering, was recognized as an Institute of Industrial Engineers Fellow at the annual conference, which took place May 18-22 in Puerto Rico this year. 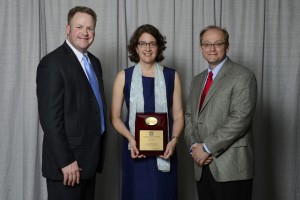 The IIE names up to 20 fellows each year, requiring that their contributions to industrial engineering be recognized on a national scale. Ryan was one of only nine fellows named this year. “It makes you feel good that people appreciate your efforts,” she said.

“Being chosen as a Fellow is a sense of recognition by the broader community that the things I’ve been working on are important and that I’ve been able to make a contribution,” Ryan said.

Ryan has been a member of the IIE for about 25 years, spending time on various committees, boards and local chapters. She was also the director of the Operations Research Division, which is one of the technical divisions of the institute.

As an IIE Fellow, Ryan said her role won’t change much because the title doesn’t come with formal responsibilities. She will, however, have more of a leadership role in advising the institute in direction and priorities alongside other fellows.

Ryan’s research deals with energy systems and optimization with uncertainty. Looking at long-term planning, she studies which kinds of capacity to invest in for energy generation, while short-term planning involves day-ahead scheduling of generating units.

“There are always uncertainties associated with demand because a lot of it depends on the weather,” Ryan explained.

Wind energy is one of the key elements of Ryan’s research. “There is also a lot of uncertainty—especially in Iowa—associated with wind power,” she added.

While she’s been working with long-term planning off and on for the majority of her career, Ryan only officially began the short-term scheduling project about a year ago, after proposing it a year before that. 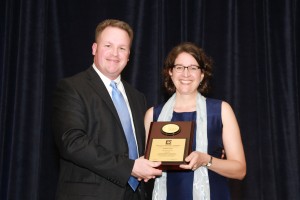 She became interested in her line of study during her first job at the University of Pittsburgh after she completed graduate school. She said the area has become even more interesting because of the environmental implications and changes in energy systems.

Research is a large part of Ryan’s work, so she spends a lot of time with Ph.D. students, which she feels is part of one of her greatest achievements.

“I think, recently, my biggest accomplishment has been guiding graduate students,” she said, “because it is developing individuals to help them learn how to do research and prepare them for professional careers.”