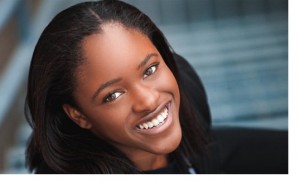 Everyone knows internships provide some of the most beneficial learning experiences for students looking for a career in engineering. Perhaps no one knows that better than Cimone Wright, a senior in computer engineering, who has an impressive seven internships under her belt and an eighth planned for the upcoming summer.

Wright started her first engineering internship at Rockwell Collins as a senior in high school in Cedar Rapids, Iowa. She was on track to graduate a year early, but changed her mind and stayed for her senior year. Because she was only taking the minimum of two classes her last year, someone on the Cedar Rapids Community Board of Education set her up with the internship.

Although she had no real experience with engineering—Wright said at the time she wasn’t even sure what being an engineer meant—her employers gave her a big project and a lot of responsibility right away.

“On the first day, I got there and they told me I was going to create the first draft of documentation for a GPS receiver used for foot soldiers,” Wright said. “That went over my head.”

The GPS would be used to find the exact location of each soldier, and the calculations she was dealing with had to be extremely precise because even being a couple centimeters off could cost a soldier his or her life.

Wright said her supervisors gave her support so she could ask questions, but also pushed her to think critically on her own. “That experience let me know I wanted to be an engineer,” she said.

As she realized what engineering was all about, it became evident Wright always had a mind for it. When she was just 8 or 9 years old, she repaired a broken cable box without any instructions or help. She said her mom had two Mediacom cable boxes, and one of them didn’t work. Wright took both of them apart, made sketches of the layouts and compared the two. Her mother was furious, but when Wright put them back together, they both worked.

During high school, she also interned at Coe College and Mercy Hospital, along with two positions with Rockwell Collins. Since coming to Iowa State, she’s worked for John Deere every summer, rotating trough the three “umbrellas” of its software division: machine control, decision support and infrastructure. Once again, she was given challenging projects.

Her last internship was with infrastructure, where she learned just how chaotic it is to combine all the different software features together for the same GPS display. Wright’s job was to take the codes from different divisions and make sure they didn’t clash—an overwhelming task.

While she worked diligently on several assignments, but she also created one of her own: a simpler John Deere software debugger on a USB drive, complete with a security feature in case the drive is lost or stolen.

“It wasn’t a project my supervisors really wanted me to do at first because they planned to keep doing what they had always done,” she said. The old process was much longer because, though the debugging tools were already on the system, they slowed down the central processing unit by running continuously.

That ultimately slowed down the whole system and as a result, Wright explained, the response time after clicking a button or navigating to a different part of the system could take extra time.

The benefits of Wright’s new debugger were the speed and ease of use. It was also much safer because only certain people could access the information it contained because of the security feature she included.

“They didn’t think it was a big deal, but I thought it was, because some of those farmers are technically savvy and you don’t want them to have critical information like that—especially if they happen to be a competitor.”

Wright started working on the debugger on the side, and when she completed it, the company realized the value of her work and kept it.

Now, ready to try something new, Wright is preparing for her next internship at Microsoft in Seattle. The software giant has been recruiting Wright since she was a college freshman. She’ll be working in the Windows division as a software development engineer in test, and she will also make recommendations for graphical user interface changes.

Wright is excited for the position because it will focus more on what she’d like to do in graduate school, which is designing user interfaces geared more toward how people actually think.

“Right now, most software is based on its users being technically savvy, but I want to make it easier for everybody,” said Wright. “The unique aspect about that perspective is that symbols mean different things in other parts of the world.

“I would like to design universal symbols and graphical user interface that can be used everywhere in the world without major changes needing to be made to compensate for the cultural differences. So this internship with Microsoft lines up with what I want to do in the long run.”