Research by MSE Assistant Professor Martin Thuo and his team was published in Scientific Reports, a journal from the publishers of Nature. The paper, titled “Mechanical Fracturing of Core-Shell Undercooled Metal Particles for Heat-Free Soldering,” was co-authored by postdocs Simge Cinar and Ian Tevis, Ph.D. student Jiahao Chen, and Thuo. Their work focused on heat-free …Continue reading “Thuo’s research featured in Scientific Reports” 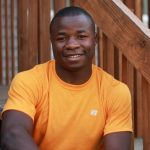 Kwizera Imani, a sophomore in aerospace engineering, originally grew up in Tanzania where he spent most of his childhood in a refugee camp. In 2008, Imani and his family were selected to start a new life in the United States, and soon after, Imani arrived in Des Moines, Iowa.

Anupam Sharma earns NSF CAREER award to study the silent flight of the owl. As new inventions fill our skies, from wind turbines whirling in an open field, to unmanned aerial vehicles scurrying around the city delivering packages, to planes buzzing 35,000 feet overhead, that new technology can pose a noisy problem. Anupam Sharma, an …Continue reading “Investigating the Owl to Develop New Technology”

Iowa State Aerospace Engineering alum Dennis Muilenburg was elected chairman of the board of directors of The Boeing Company, effective March 1, 2016, the company announced Monday. Muilenburg, who earned his bachelor’s degree in Aerospace Engineering from Iowa State in 1986, was named Boeing’s chief executive officer in 2015 and president in 2013. Muilenburg joined the board of directors in …Continue reading “Dennis Muilenburg Named Boeing Chairman”

Helmers: Iowa has the methods to do it; but it will take public funds Dr. Matt Helmers, an Iowa State University agriculture and biosystems engineering professor, spoke with members of the ag committee of the Greater Fort Dodge Growth Alliance Feb. 4, outlining the challenges of farming’s impact of grain farming on water quality and …Continue reading “Helmers: Keeping nitrates on the farm”

Todd VerHeecke likes to learn about agriculture, so much so that last summer he went to Germany. Mr. VerHeecke farms about 150 acres near the farm of his father, Rich VerHeecke, about five miles west of Geneseo. He also is a member of the Henry County Farm Bureau. “My interest in agriculture started in high …Continue reading “AST alum’s quest for knowledge takes him to Germany” 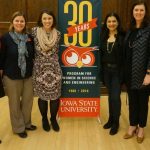 Thirty years ago, the Program for Women in Science and Engineering (WiSE) was a fraction of what it is today. With initially only two programs – Taking the Road Less Traveled and a summer internship – the program now boasts several K-12 outreach programs, learning communities, study abroad opportunities and so much more.

AerE alums lead ecoDemonstrator project at Boeing A degree from Iowa State in aerospace engineering has brought two alums to a big project in their field. Doug Christensen (AerE ’87) and Dean Hawkinson (AerE ’00) both currently work on the ecoDemonstrator program at Boeing. The program is an inventive and environmentally progressive way for engineers …Continue reading “Advancing aviation technology one recycled plane at a time” 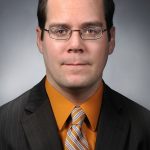 Deep in the basement of the agricultural and biosystems engineering building at Iowa State University, a tiny laser pings back and forth from the guts of a gargantuan 3-D printer, striking a thin layer of metal dust on a metal plate at precisely the right spots. Within seconds, the outline of a pair of scissors …Continue reading “The magic of 3-D metal printing”